Our dentists bring years of experience and skill to their practice and we take pride in providing excellent care for our patients. We also care about the community which we call home and believe in giving back. Take some time to get to know the dentists at Silver and Dobbin. 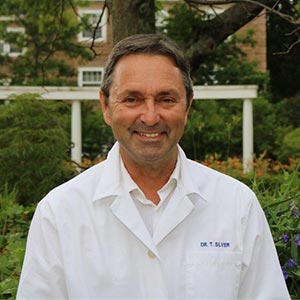 Born and raised in Antigonish, NS, Dr. Tim Silver received a Bachelor of Science degree with a major in Biology from St. Francis Xavier University in 1985. He was awarded his Doctor of Dental Surgery from Dalhousie University, Halifax, NS, in 1989. While attending dental school he was recipient of The WB Saunders award and was senior class president.

Dr. Silver initially practiced in numerous clinics in Nova Scotia upon graduating from dental school. His professional work experience continued when he provided dentistry to under serviced areas throughout coastal Labrador, as a staff member of Grenfell Regional Health Services (formally Grenfell Mission) in Goose Bay, Labrador. While practicing dentistry in Labrador, Dr. Silver contributed to research projects studying the incidence of caries and fluorosis in isolated populations.

His ongoing commitment to professional development and organized dentistry is demonstrated by his committee membership and ongoing learning. He recently completed 7 years as a member of Governing Council for the Nova Scotia Dental Association. He also regularly attends provincial, national and international conferences.

Tim returned to Antigonish, with his wife Danielle, in 2006 and continues to work in private practice as a partner of Silver and Dobbin Dental Associates. They have one daughter Anna Bae. As a sports enthusiast, he models a physically active lifestyle. He enjoys boating, motorcycling, soccer and golf. His soccer involvements include playing soccer year round and coaching within the Antigonish Minor Soccer Association.

Dr. Marianne Dobbin was born and raised in Antigonish, Nova Scotia and earned a Bachelor of Science in Human Kinetics with First Class Honours in 2007 from St. Francis Xavier University. She completed her Doctor of Dental Surgery at Dalhousie University in 2012, where she had been voted Class Valedictorian and was presented with the Canadian Dental Association Student Leadership Award.
Since graduation Dr. Dobbin has practiced as an associate dentist in several communities across Nova Scotia including Arichat, St. Peter’s, Antigonish, and Truro. When the opportunity arose in 2017, she happily joined the team at Champoux & Silver Dental.  By May of 2019, Dr. Dobbin partnered with Dr. Silver as co-owners of Silver & Dobbin Dental.
Beyond the chairside, Dr. Dobbin has been active in organized dentistry as the elected regional representative for the Nova Scotia Dental Association Governing Council (2015 – present), and past treasurer for both the Northern Nova Scotia Dental Society (2015 – 2018) and the Strait Area Dental Study Club (2016 – 2017). She also stayed connected with Dalhousie University as an appointed member of the Dalhousie Alumni Association Board of Directors (2016 – 2019).
In her leisure time, Dr. Dobbin enjoys spending time with her husband and their two dogs, getting together with family and friends, traveling, taking dance lessons, and learning to golf.
Dr. Dobbin is pleased to provide a broad range of dental services to her patients in a welcoming and friendly atmosphere!